Organisational culture as a driver of innovation and success

An innovation always means entering unknown territory without knowledge. This fact makes every innovation risky. The usual failure rates are correspondingly high. At the same time, change is inevitable. As Schumpeter (1934) has described, the interplay between organisations and their environment creates constant change.  Thus, it creates a constant pressure to adjust to new realities to sustain and create competitive advantages. One of the most promising approaches is to use the entire intellectual capital by activating all members of an organisation. The best ideas, tools and processes will not lead to innovations if they are not supported and applied by the right people in the right environment.

Organisational culture is most important at this point. As Denison (1990) states, this term stands for “the underlying values, beliefs and principles that serve as a foundation for an organisation’s management system as well as the set of management practices and behaviours that both exemplify and reinforce those basic principles.”

The Global Innovation 1000 study by the consulting firm Booz & Company confirms this view with data from a survey of 600 managers. Under the title Why Culture Is Key, they were able to establish a connection between an organisational culture that promotes innovation, coupled with a corresponding strategy, and economic success. Companies that combine both have 30% more goodwill and have grown 17% more than their competitors over the last 5 years.

This can be confirmed with data from our own research. Using the modular inventory for organisational research(modul_or), we can show that both the organisational culture and the management style correlate significantly with the success of the company. If, however, the correlations are calculated simultaneously conducting a multiple regression, the influence of executives disappears completely and only the shared values and norms remain as the only predictor of organisational success. The saying of Peter Drucker Culture eats Strategy for Breakfast seems to be true.

If you want to know more about organisational culture, innovation, and failure please take a look at the book  Strategies in Failure Management (Springer), the book Failure-driven Innovation (artop), or read the latest news about the modular inventory for organisational research (modul_or). 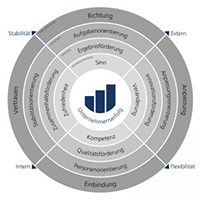 modul-or is a scientific tool for organisational analysis which helps managers to better understand aspects and elements of a company`s organisational culture.